The Fr. Noonan Distinguished Alumnus Award recognizes and honors the achievements of outstanding alumni. The McQuaid Alumni Association established the award in 1992 in honor of Richard P. Noonan, S.J., principal of McQuaid from 1966-67, and revered alumni director from 1969 until his retirement in 1995. 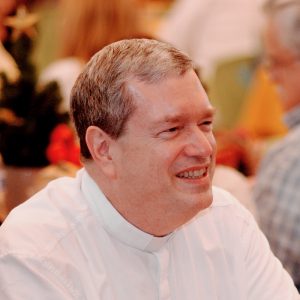 Fr. Lawrence Searles, S.J., says it is exceedingly easy to fall in love with Puerto Rico and its people. The 1975 McQuaid Jesuit alumnus has been
stationed on the island for the better part of 35 years, serving the Society of Jesus in a variety of roles; most recently as pastor of the Parroquia San Ignacio with full responsibility for the parish and the Academia San Ignacio de Loyola, the parochial school.

Fr. Searles is a strong promoter of Ignatian Spirituality within his parish and has an especially keen interest in helping adolescents and young adults discover the depths of their Christian faith by teaching them the art of discernment so as to be better attuned to God’s will in their lives. For this reason, Ignatian Spirituality serves as the cornerstone of the parish’s Confirmation program. Ignatian Spirituality inevitably leads to some form of social involvement, as is no less the case in San Ignacio Parish, which has been characterized through the years by its social
involvement. Inspired by Pope Francis’s call to parishes to be more like “Field Hospitals,” Fr. Searles has actively sought ways to encourage the direct service of Catholics to the most physically and spiritually needy of Puerto Rico. This was never more evident than in September 2017 when Puerto Rico was devastated by Hurricane Maria, one week after Hurricane Irma had passed through the easternmost part of the island.

The Category 5 hurricane was the worst natural disaster on record to hit Puerto Rico and, according to the National Hurricane Center, the third costliest U.S. Atlantic hurricane, causing an estimated $90 billion in damages. The entire island was declared a Federal Disaster Zone as 95 percent of the island was without power for months, and less than half the population had drinkable water.

Shortly after the hurricane, Fr. Searles found himself part of a large scale recovery operation, not only for his own parish, but for churches and communities throughout the island. With the help of the San Ignacio parishioners, he established a pantry, originally meant to provide staple items for the elderly and single parents unable to stand in long lines at supermarkets. The pantry ended up being an important supply center for a number of communities on the island. In coordination with the Colegio San Ignacio, Fr. Searles helped distribute needed water filters to people with no access to clean, uncontaminated water. He also raised more than $200,000, which has been used to help people rebuild their homes and their lives. Fr. Searles also served as a contact to free containers of food and materials backed up at the docks for lack of island-based sponsors.

The work continues. The effects of the hurricanes are still evident. The communities served by the pantry are generally self-sufficient again, so the pantry now provides food each weekday for an after school program in a poor area of Cataño in the metropolitan San Juan area. With the donations received, the parish continues to help people buy materials for rebuilding, which remains an island-wide challenge.

A true man for others, McQuaid Jesuit is proud to award the 2019 Fr. Noonan Distinguished Alumnus of the Year to Fr. Searles.