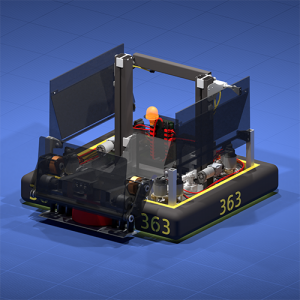 Congratulations to the IgKnighters Computer-Aided Design (CAD) team who finished 13th out of 80 teams worldwide in the most recent F4 CADathon competition. Teams had 72 hours from project reveal to due date and time to submit the most complete, thorough, and ideal CAD for a robot to compete and win a robotics competition. The competition itself was fictional but the detail of the competition was key as it dictated what design was necessary to build in CAD.

Senior Taiden Foryt was the team’s lead designer and classmate Matt Colton did the renderings. Also contributing were Emma Gardinier, a junior at East Irondequoit, as well as team mentor Mark Mascadre.

The detail in McQuaid’s submission was highly valued as the team added electrical wiring showing how parts would fit in the robot and work. They also included multiple renderings of different robot components that were above and beyond what most teams submitted.

The designs were judged by a panel of experts with winners being revealed January 1 live on Twitch.