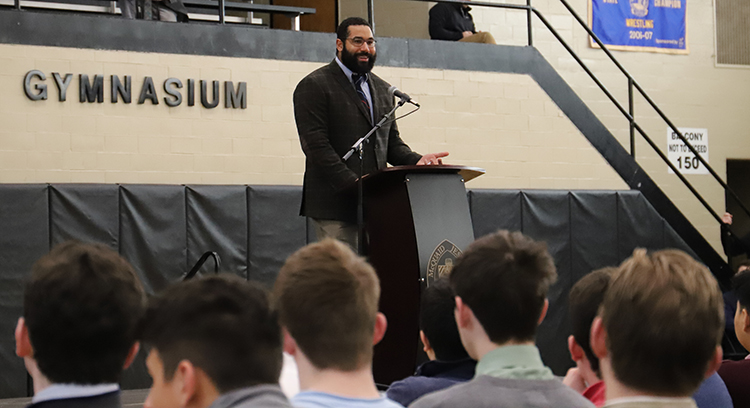 When we hear the word “saint” before somebody’s name, we may feel a sense of distance.  The word “saint” recognizes something extraordinary and holy about someone – God worked through saints in unique, sometimes incredible ways.

But saints were people, too.  They were women and men who had the same basic needs as us, the same desires and fears as us, and had to make choices about their lives, just like us.

Saint Francis Xavier, who McQuaid recognizes in a special way this week, was indeed a saint, but he was also a man like you and me. The reality is that we remember Francis as a cross-carrying missionary, as the statue in our chapel depicts him, but we could just as well remember him at his desk in school, with his parents and friends at home, or as a young man discerning what to do with his life.

Fr. Arturo Sosa, the leader of the Jesuits, recently visited St. Francis Xavier’s tomb in India. In a homily, Fr. Sosa identified three traits of Francis Xavier as a man, not as a saint, that make him especially inspiring:

Francis Xavier is a role model for you as young men.  Monday’s keynote speaker, Mr. John Urschel, reflects those same traits Fr. Sosa identified in Francis Xavier: a carefully discerned passion for topics close to his heart; a willingness to pick things up and let things go in an effort to become his true self; and finally a sense of being part of a team, whether it is on the football field, in the classroom, or with his family and friends.

Urschel played three seasons in the NFL for the Baltimore Ravens before retiring to pursue a mathematics career and a PhD at MIT. Urschel shared his story of deciding between two passions, football and math, and how students can be their authentic selves. Following his talk he answered student questions.