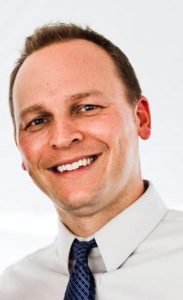 McQuaid Jesuit has announced the hiring of Jonathan (Jon) Matt as the school’s new director of athletics. A McQuaid alumnus, Jon is a familiar presence on campus having served as the strength and conditioning coach since 2013 as well as a supervisor for athletic events.

“Jon will bring a unique perspective and a love of our mission to the role,” says McQuaid principal, Adam Baber. “I am excited to work with him, alongside our outstanding coaches, to support our student-athletes in their continued pursuit of excellence and brotherhood.”

Jon comes to McQuaid following 11 years at PCX Sports Performance where, in addition to training clients, he served as chief financial officer responsible for managing personnel, finance, and marketing. In 2018, Jon started and oversaw the physical education program at Rochester’s Nativity Preparatory Academy.

Jon succeeds Matt Thomas who has served as McQuaid’s athletic director since 2013. Matt will remain with the school, transitioning to vice president of operations. Both Jon and Matt will assume their new roles July 1.