During his papacy, Pope Francis has encouraged Catholics to fight what he calls a “culture of indifference” and instead to “build a culture of encounter, this encounter that returns to each person their dignity as children of God, the dignity of living.” Francis has particularly extolled encountering those on the margins and the Arrupe Society’s Food Pantry carries out that mission. Two students, Bikash Koirala ’19 and Jack Rumble ’20, took time to reflect on what that encounter has meant for them:

“Before Christmas Break, as part of the McQuaid Jesuit Food Pantry project, we met with an Iraqi family consisting of a father and a mother and two of their children, a sixteen year old girl and her seven year old brother. We also met Khan, a man who immigrated from Pakistan to Australia and recently moved to the US and is waiting for his wife and children. They were all amazing. We had races with the little boy from the Iraqi family who was faster than Usain Bolt (he even beat Mr. Greiner!). We also wanted to hear Khan’s story and it was quite an amazing one. Khan spoke perfect English and even told us he used to work as a social worker helping refugees! Our Encounter helps refugee families have an easier time finding people that they can talk to. It’s nice to have a friend to share a meal with and just talk. We also gave them food from the Food Pantry which was stocked with the canned goods donated by the McQuaid Community. This helps take away the worry of providing for their families. The take away from this is that people the world over want the same things: community, friends, security, and sharing stories. One goal we have at McQuaid Jesuit is to hear the stories of the refugees of Rochester!

Stay tuned for the next Food Drive.  When you donate, remember, it’s not just for a dress down, you are providing the food that real people need and eat.” 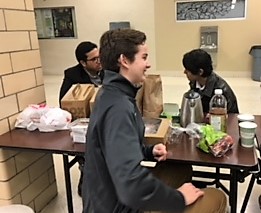