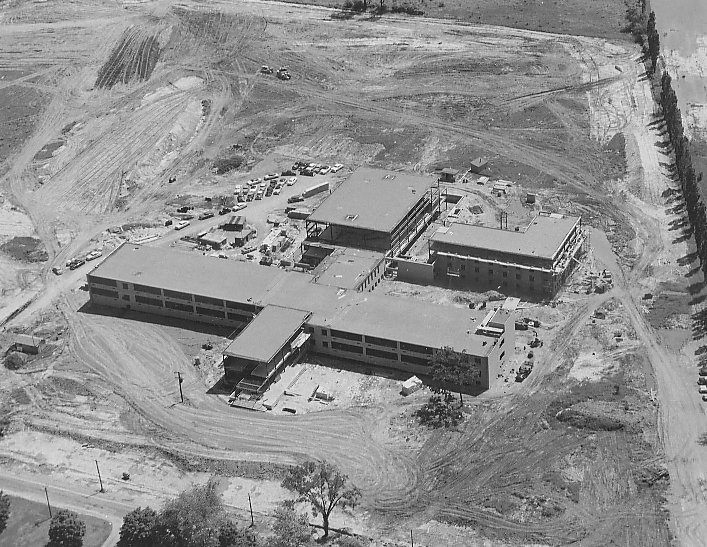 If Bishop Bernard McQuaid had had his way, McQuaid Jesuit would now be more than 150 years old. As early as the late 1870’s, the first Bishop of Rochester (1868-1909) had tried to convince the Jesuits to found an institution of learning in his diocese. He’d admired them as teachers since his own student days at St. Joseph’s Seminary on the campus of Fordham University. However, during the bishop’s regular ad Limina visit to the pope in 1879, Henry Edward Cardinal Manning of London scuttled all hopes of a Jesuit high school in Rochester for at least a half century more.

It wasn’t until 1954 that Bishop McQuaid’s idea and hope of a Jesuit institution in Rochester would become a reality when McQuaid Jesuit High School opened its doors to 196 young men who exemplified the Jesuit ideal of leaders in service both personally and professionally.

Ground was broken for the 33-acre campus June 23, 1953, and the building was completed by September 1955. While the new school was under construction, temporary quarters were found in the former St. Andrew’s Seminary building in Rochester. Here, the first class of McQuaid Jesuit was admitted September 8, 1954. That group of young men, together with the new first year class, started the school’s second year in the current complex September 7, 1955.

McQuaid Jesuit has been in continual operation since 1954, and continues to thrive today as a Jesuit, Catholic, independent college preparatory school.

The Jesuit School’s Network (JSN) was founded in 1970 to address the unique needs of the Jesuit secondary school apostolate in the United States and Canada. From Canisius High School in Buffalo and Saint Ignatius High School in Cleveland, to Strake Jesuit in Houston and Jesuit High School in Sacramento, McQuaid is connected to more than 50 fellow Jesuit schools around the country and Canada through the JSN. This network initiates programs and provides services that enable its member schools to sustain their Ignatian vision and Jesuit mission of educational excellence in the formation of young men and women of competence, conscience, and compassion.