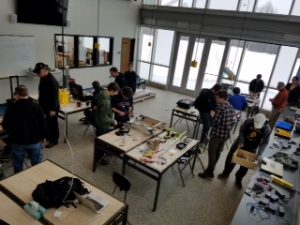 McQuaid Jesuit sponsors three “competitive” FIRST Robotics teams: FIRST “IgKnighters” Robotics (high school), FIRST Tech (Grades 7-12), and FIRST Lego (middle school). Co-curricular robotics programs are fundamental to achieving the goals of a strong STEM curriculum like McQuaid’s because they teach relevant skills and background knowledge while allowing students the opportunity to experiment and gain hands-on experience. McQuaid’s robotics students work collaboratively with one another and their mentors to build, program, and use a robot in competitive settings.

The IgKNIGHTers is the school’s FIRST robotics team open to all high school students. The principal activity of the team is to conceive, design, build and operate a competition robot during the months of January thru March with a goal of solving a common problem. IgKnighters are challenged to design and build a robot by using a standard “kit of parts” guided by a common set of rules in order to play a sophisticated field game. During a typical “build season,” McQuaid students can spend up to 150 hours each building their robot, with many others close behind in hours.

Non-build related opportunities are available to those interested in working on the team’s website, chairman’s video, or business operations. Offseason activities include hosting a water engineering contest and a Qualifying Tournament for elementary and middle school students involved in Lego Robotics.

The team is sponsored by Delphi Corporation, Xylem, and the Xerox Corporation and is supported by professional mentors who volunteer their time to help students with the build process. This is the logical starting point for students interested in engineering or computer careers or for those looking for a solid team experience outside of athletics. 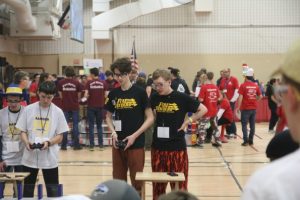 In December 2017, the newest addition to McQuaid’s robotics program, the Fire Senders, made its debut in a FIRST Tech Challenge (FTC). FTC is a program that resides between FIRST Lego League (FLL) and high school robotics (FRC). FIRST Tech teams are challenged to design, build, program, and operate robots to compete in a head-to-head challenge in an alliance format. Design and construction is limited in comparison to the IgKnighters’ work. 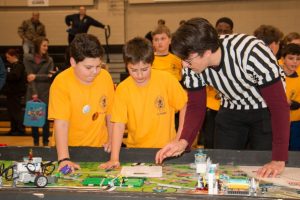 FIRST Lego Robotics is a registered First Lego League (FLL) team which works toward a goal of learning about the world, robotics, and each other. Our team builds science, engineering, and technology skills, that inspire innovation, and that foster well-rounded life capabilities including self-confidence, communication, and leadership. Each fall, McQuaid is proud to host the Rochester area’s FIRST Lego League Competition.

In addition, the IgKNnighters are proud hosts of the annual “Let’s Solve Water” contest. Partnering with our sponsor Xylem, the IgKnighters are proud to be a part of creating a contest that not only supports local robotics teams, but educates students about real-world water sustainability issues facing many in the developing world.