Commitment to STEM Helps Students Succeed at the Next Level

McQuaid offers a comprehensive and intensive STEM educational experience to all of its students through its premiere Jesuit college preparatory curriculum. In addition to traditional core, Advanced Placement, and elective courses, our curriculum offers a variety of opportunities in robotics and engineering. In conjunction with the Rochester Institute of Technology (RIT), McQuaid participates in Project Lead the Way (PLTW), a nationally recognized organization dedicated to exploring engineering while at the same time earning college credit.

Students enrolled in PLTW classes participate in a hands-on, activity oriented program that utilizes team efforts, reinforces their study of math and science, and explores a major career path that, if they wish to continue, will prepare them for further education in the field of engineering or engineering technology.

In fall 2017, the McQuaid Jesuit community dedicated its new 36,000 square-foot, state-of-the-art, Wegman Family Science and Technology Center. The facility features classrooms and laboratories dedicated to all of the sciences, computer technology, and robotics and engineering. With this addition, McQuaid is the only middle school and high school in the area, public or private, to have a facility dedicated entirely to Science, Technology, Engineering and Mathematics (STEM) education.

The Wegman Center is world class. It’s better than the facilities I had in college that I attended. And I haven’t seen another school that has or can do what we can do here. I think it’s going to help inspire students to do their best work.

Along with clubs focused in the various sciences and mathematics, McQuaid sponsors three co-curricular opportunities in robotics. The “IgKnighters” are McQuaid’s award-winning FIRST team. Founded in 2009, the team has grown from just two members to more than 40 young men who compete in the FIRST Robotics Competition hosted annually in March at RIT. In 2017, the IgKnighters won the prestigious “Entrepreneurs’ Award” at the FIRST competition.

The FIRST Lego Robotics team is comprised of a similar number of middle school students who are interested in pursuing robotics and engineering, as well as in solving problems in the STEM area. Finally, the FIRST Tech team made its debut in December 2017. Similar to FIRST Robotics, the design and construction is limited in comparison.

McQuaid robotics is supported by a host of professionals in the engineering and tech areas, who mentor our students in each of the FIRST areas. The school also sponsors events such as “Let’s Solve Water,” and a local Lego robotics competition. Our robotics sponsors, Xylem, Xerox, Delphi, and Aptiv enable students to pursue the fields of robotics and engineering through their respective FIRST teams. 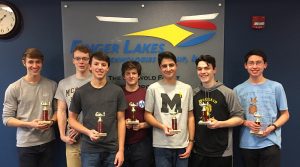 Tests of Engineering Aptitude, Mathematics and Science (TESTS)  is an annual, one-day competition for middle and high school students who apply math and science knowledge in practical, creative ways to solve real-world engineering challenges. In 2017, McQuaid’s TESTS team competed in the national competition in Orlando, Florida after qualifying with the best score in New York State. The 2017 TESTS competition, “Engineering the Environment,” explored energy efficiency, geothermal heat pumps, and wastewater treatment. Teams were judged on the following: an essay on renewable energy for the geographic region of one’s school; a multiple choice exam based on real-world engineering scenarios; and the creation of a robotic arm scored on efficiency as well as cost. Along with having the best score in the state, it was second-best out of the 50 teams in their division nationally.

McQuaid Jesuit students are accepted, attend, and succeed at the best colleges and universities locally, regionally, nationally, and globally. Statistically, six percent of our alumni graduate from college in less than four years; 90 percent graduate in four years. As a result, the majority of McQuaid graduates enter the work force at a higher rate than their peers. Fifty-five percent possess post-baccalaureate degrees such as masters and doctoral degrees. In addition to liberal arts, business and pre-professional programs, our students also pursue studies in STEM areas from the practical as well as theoretical perspective.

Ten percent of our alumni choose to study at the Rochester Institute of Technology where they pursue degrees in traditional STEM majors such as electrical, chemical and mechanical engineering, or new and innovative initiatives such as Game Design and Development. A significant portion of our alumni pursue STEM studies on similar campuses such as Cornell, Clarkson, RPI or MIT. Other graduates attend Jesuit institutions like Holy Cross or Georgetown, or larger universities like the University of Rochester or Notre Dame where they not only pursue the liberal arts, business, “pure” sciences and mathematics, and pre-professional programs, but they also study engineering and technology from a theoretical point of view with an eye toward higher studies.

A STEM education at this level is about building enthusiasm for the disciplines of engineering or computer science or what are clearly related as STEM careers. Our graduates are working at the best and most recognizable companies in the United States, Google, Microsoft, IBM, and the like, and have attended the universities like MIT, RIT, Carnegie Melon, Caltech. Our graduates are succeeding at the next level.”

For more than 60 years, our alumni have been leaders not only in the Rochester and Western New York area, but also in our region, nation and world. They are lawyers, accountants, doctors, artists, professors, consultants, entrepreneurs; leaders in the law, business, finance, medicine, education, church, and the arts. As a Jesuit school, McQuaid also is proud of our alumni leaders in the STEM-related fields. With the growth of the engineering and technological fields, we can expect McQuaid alumni to continue leading these fields as they have done in others throughout the years.