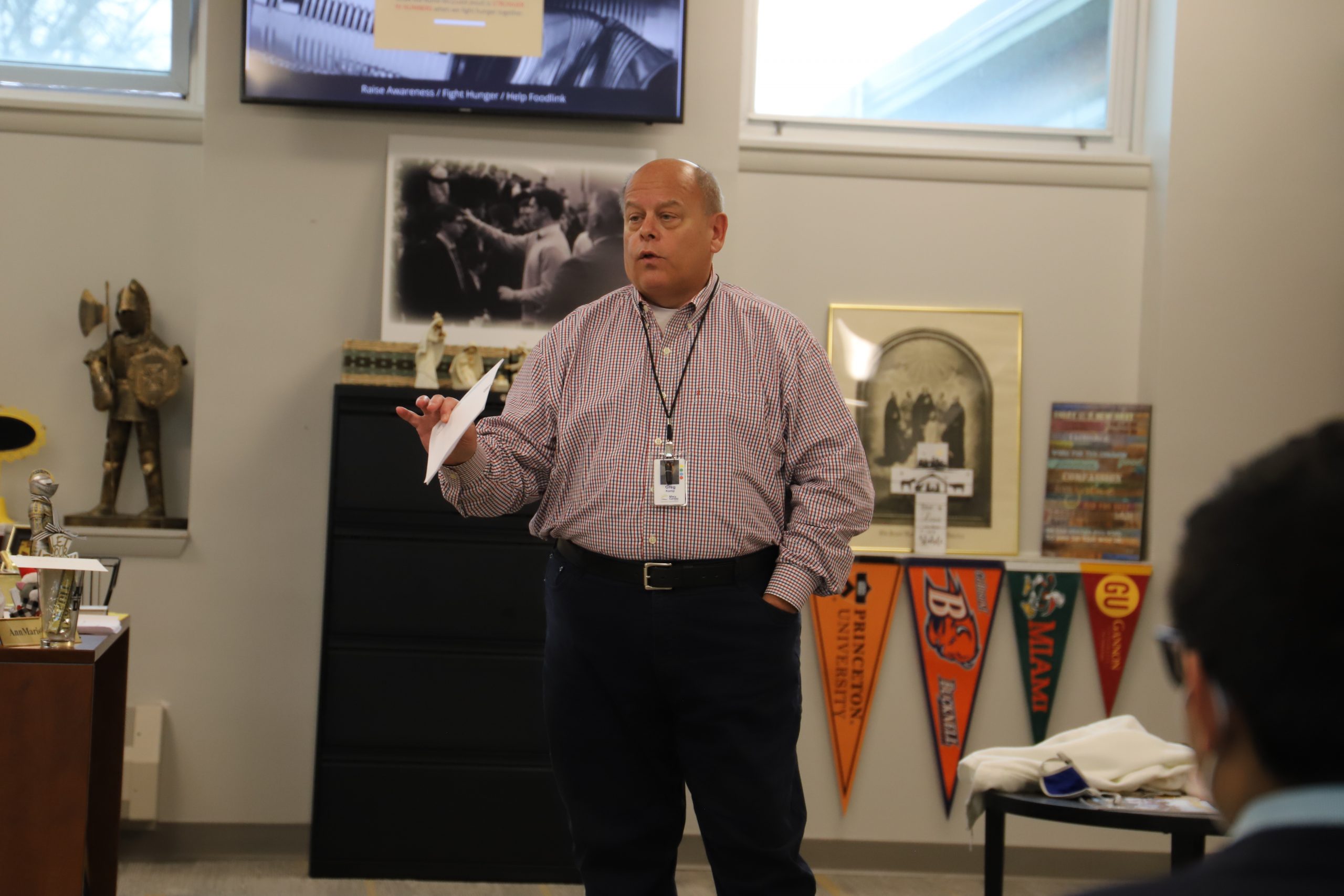 Enrolling at McQuaid Jesuit in the fall of 1974, Greg Kamp ‘78 was sure of his desire to pursue a career in journalism and communications. At the direction of his high school guidance counselors, Kamp, the son of longtime McQuaid history teacher and principal, Frank Kamp, spent his high school years honing both his writing and public speaking skills. He credits English teachers Gerald Jaromin and Charlie Turk with being especially influential. While focused on his classes, Kamp also learned to embrace being a “man for others” and “setting the world on fire,” two hallmarks of Jesuit education that have inspired him throughout his professional career.

After McQuaid, Kamp attended St. John Fisher College majoring in journalism and communications while working part-time as a sports producer at Rochester’s ABC television affiliate. He joined the station full-time the day following his graduation in 1982.

In the late 1980s Kamp transitioned from journalism to public relations, taking a corporate position in New York City where he was charged with video production. He soon moved back to Rochester to work for PW Minor, a shoe company catering to customers with medical conditions affecting their ability to walk. At this juncture, tasked with pitching products that dramatically improved the quality of life of their consumers, Kamp recognized the opportunity to integrate his professional expertise and his calling to be a man for others. “I realized I could do communications work and do something that benefits society,” Kamp recalls.

Kamp was eventually introduced by a friend to the Mary Cariola Center, a Rochester-based non-profit organization that serves the needs of children and young adults with disabilities by providing education, community and residential programs, and clinical support. Kamp’s initial involvement with the center was as a volunteer at the annual “Walking on Sunshine” fundraiser.

Kamp was immediately drawn to Mary Cariola’s vocation and volunteered more of his time and knowledge to offer employee seminars on social media and general media training. As his involvement increased, the fit between the two parties proved undeniable. In 2017, Kamp was hired as Mary Cariola’s director of marketing and communications, the position he currently holds.

Asked to describe the day-to-day routine of working at Mary Cariola, Kamp chuckles and replies, “At Mary Cariola, every single day is different.” While each day brings unpredictable new challenges, Kamp’s goal remains constant: “Tell the story of the amazing things happening at Mary Cariola.” The most important lesson Kamp has learned during his impressive career in communications is the importance of being able to effectively convey a message to a variety of different stakeholders. On a given day, he may deal directly with the media, the center’s board of directors, parents, donors, or local government. This communication, or as Kamp brands it, “storytelling,” shines a deserving spotlight on the many faces of Mary Cariola, and contributes to the center’s continued success.

Kamp sees his current role at Mary Cariola as the perfect synthesis of the career field he is passionate about and the “men for others” and “set fire upon the earth” mantras that resonate with anyone who has walked the halls of McQuaid Jesuit. With the diction of a man steeped in years of communications experience, he defines the latter, urging, “Whatever you do, do it with vigor, strength, and power.”

The many faces of Mary Cariola include teachers, therapists, administrative employees like Kamp, and centrally, the children and young adults who they serve. The opportunity to use his professional skills in the fast-paced environment that characterizes the communications field to contribute to such a worthy mission is one Kamp relishes. Experiences like prom, talent shows, and graduation ceremonies that many of us may take for granted as part of growing up, take on a greater meaning for the families served by Mary Cariola. Witnessing the impact of these experiences is what makes Kamp’s job so rewarding.

Kamp remains active in the McQuaid Jesuit Community because of the appreciation he feels for his education. On November 30, 2021, as part of the new Alumni Career Forums, Kamp returned to campus to talk with students interested in communications. Over the course of his career, he has strived to be of help to those looking for guidance, as others were to him at McQuaid and elsewhere. Because of the foundational mottos Kamp took from McQuaid into his professional life, he feels a strong sense of connection to those that walk the same halls he did, even decades later.