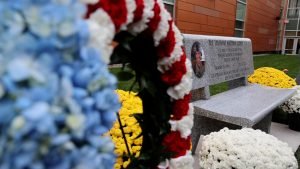 On November 15 there was a very special ceremony held in the student cloister outside the Wegman Center. Theodore Matthew Glende, ’07 was serving with the U.S. Army in Afghanistan when he was killed attempting to aid wounded soldiers during a firefight.

The bench was spearheaded by COL Mark Tallo, ’80, Retired, Army National Guard. Tallo had a chance meeting with Glende at a base in Afghanistan just weeks before his death.

“I just can’t imagine a better example of being men for others,” Tallo said.  “He literally laid down his life to save his fellow soldiers.”

The money for bench was raised as a capstone project by two McQuaid seniors, Henry Gerstner and Nick Boev.

You can view the story by clicking here:  Bench Dedication