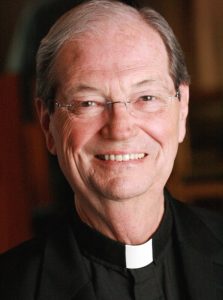 On Tuesday, July 20, a memorial Mass was held for former president and chancellor, Fr. Edward Salmon, S.J. Fr. Salmon passed away July 3 at the age of 84 while residing at Campion Center, a Jesuit infirmary outside of Boston. The following is the homily given by McQuaid president, Fr. Philip Judge, S.J., one of Fr. Salmon’s closest Jesuit friends.

It was a strange and blessed moment, I think, that a group of Fr. Salmon’s closest Jesuit friends heard the news of his death while gathered at a place that Ed loved so well, the Jesuit villa on Lake Cazenovia. So we came together quite naturally that Sunday morning around a glass coffee table on a porch overlooking the lake and celebrated Mass, as Ed had done for us and with us during holidays and vacations over the last forty years. And there it was we celebrated Ed at Ed’s best: making us companions – bread-breakers – opening the Word, blessing bread and wine in Jesus’ name, and cooking more than a few of his favorite meals and presiding at each of those tables. Prayer, blueberry pancakes, a Grey Goose in hand, Ed was first and foremost our companion, and companion to so many others over the years.

Isaiah prophesies “Yahweh will prepare for all peoples a banquet of rich food, a banquet of fine wines, of food rich and juicy.” So often God provided; so often Ed served at table. And always he pointed beyond, pointed with great hope: “See, this is our God in whom we hoped for salvation.”

We count our Jesuit lives from when we enter the Novitiate, which for Ed was listed as 1980. But that was actually his second entrance. The first time he spent much of his formation in the Philippines – loved as he would be everywhere else, even attending his Ateneo students’ Golden jubilee of graduation a few years ago – but then he left just before ordination. So all in all, Ed was a Jesuit for almost 55 years. And Ed believed what our General Congregation told us: “To be a Jesuit is to know that one is a sinner, yet called to be a companion of Jesus.” In his honesty and prayer and love he showed us what that companionship meant.

Chris and R.J. are Ed’s two remaining brothers along with generations of nieces, nephews, and grand-nieces and grand-nephews as well as cousins who make up his family, the younger of whom Ed collectively referred to as the “wee beasties” when we were early in Jesuit formation. Before and during all his time as a Jesuit, Ed was always deeply devoted to his family and remained a kind of glue for them. Some of the hardest things he did was to bury siblings, even as he rejoiced in weddings and baptisms for the later generation. The Letter to the Ephesians speaks of God’s power at work in our families, spiritual and natural. In them he found ‘God’s power working in them, doing infinitely more than he could ask or imagine, from generation to generation.’

At the end of the day, ministry and companionship aren’t just about enjoying meals, but actually providing them and bringing people together. Ed was to all those he met, I think, a friend. But he was a friend who was a Jesuit and a priest. There, too, he took his cue from Jesus, the Jesus in John’s gospel who anticipated the needs of those who came to hear him, determined beforehand to provide for them, and challenged his disciples to do the same. And Ed adapted to varied needs and varied calls over the years, from running a retreat house, to guiding young Jesuits in formation, to serving as Superior for his brothers, to working in our high schools. His 14 years here in Rochester were quite possibly his happiest. Not only did he hold administrative posts at McQuaid ranging from community Superior to President to Chancellor, but he loved serving the Cathedral community here and varied communities including those at Our Lady of Lourdes and Nazareth College.

The heart of Ed’s ministry, though, wherever he was assigned and whatever job he had, was spiritual direction and being a retreat master. Some he directed for decades, others got the chance to experience weekend preached retreats, still others he led through the Long Retreat or the 19th Annotation version of the Spiritual Exercises. More than a few times this year Ed called me from our infirmary at Campion Center to look through a file cabinet of retreat notes he left at the house to find some weekend or week he had preached. The file cabinet had three full drawers of notes. How well, I think, the seventh annotation in the “how to” section of the Exercises describes what Ed did for probably the majority of us in this Cathedral: “Let the director give the exercitant courage and strength for the future, and lay open before that person the cunning tricks of the enemy of human nature, and encourage the person to prepare and make ready for the consolation that is to come.” How often did we hear from him an “Ah…” or “aha…” during those conversations, those moments of revelation of God at work in us.

Death is never easy and not usually something we dwell on. Of course, Ed is one of the few who actually practiced dying, very convincingly at one point here in Rochester. But over these past years we have watched Ed wrestle with his body’s aging and failures. And each time no matter the issue Ed fought it off and struggled through it. At the end the irony may be that he died so peacefully in his recliner at Campion. Maybe that, too, is captured by Ephesians: ‘May God give you power for your hidden self to grow strong, so that Christ may live in your heart through faith and then with all the saints you will know the love of Christ and be filled with the utter fullness of God.’ It is hard to let someone go. But now I suspect Ed is asking even more fervently for our consolation than we are for his rest. I end with what he borrowed from Corinthians on his ordination prayer card, Eddie, “you are Christ’s and Christ is God’s. Welcome home. And please keep praying for us.