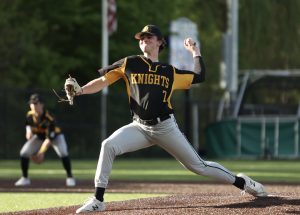 Will Taylor capped off an incredible senior season for the Knights by being named the MaxPreps New York State Player of the Year and the All Greater Rochester Player of the Year.  Taylor helped lead the team to a New York Sate title at the plate, where he led the team in home runs, and on the mound, where he threw a no hitter and posted an ERA of 1.08.  Taylor will be continuing his academic and athletic career at Wofford in the fall.

Will wasn’t the only Knight selected to the AGR baseball team, Daniel McAliney and Aiden Stewart were also chosen.

Other athletes selected to the AGR were Hunter Smith for lacrosse and Daniel Dacuta for tennis.  Smith was also named a USA Lacrosse Academic All American.