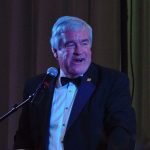 Following eight years of service, Tim Nally is retiring from McQuaid’s Advancement Office. His final day is December 31. As many of you know, “Nally” is a proud alumnus from the Class of 1967 and an even prouder dad of three sons, Matt ’98, Ben ’02, and AJ ’06.

During Tim’s tenure as VP of Advancement, he built and nurtured countless relationships as both alumnus and friend. His success is most notable during the school’s last fundraising campaign, “IgKnight The Future,” where Tim played an integral role in raising more than $24M. This ambitious endeavor funded the creation of our incredible Wegman Family Science and Technology Center and also raised significant funds for the endowment and annual fund. In addition to being a SIMBA moderator and beloved fixture at most McQuaid sporting events, Tim also devoted much time to support students through Kairos and other spiritual exercises. His love and dedication for the success of all students at McQuaid was known throughout the community. He will no doubt be greatly missed, although we fully expect to still see Nally around campus at events not only in the coming year, but for many more years to come. And when you do, don’t call him mister!