It is truly amazing how, even in such a big world, the connections made at a place like McQuaid can make it seem so small.  Jim Hanley, ’75 recently had an experience that illustrates that fact perfectly.

Jim is a founding partner of Taconic Builders based in New York City.  He recently went to Rome for a conference and tour of the Eternal City’s architecture.  There were more than 300 people at the conference and they were randomly split into small groups to see the sights.  He started talking with another member of his group and discovered that he was also raised in Rochester and sure enough, he was speaking with a fellow McQuaid graduate, Tim Slattery, ’87, who is a principal of Hart Howerton Architects in San Francisco.

Jim says they had a great time reflecting on their formative years at McQuaid.  Amazing that they went from South Clinton to opposite coasts before finally meeting one another in Rome. 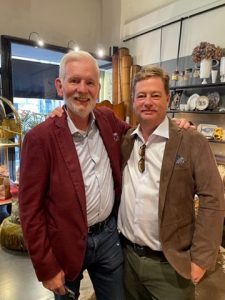 Jim Hanley, ’75 and Tim Slattery, ’87 both went to McQuaid but met for the first time in Rome.